Once I had a general idea, I came up with a list of the most important points to address. These points included the television's impact on the family, entertainment, politics, and the media. Since I developed a greater focus on the topic, I was able to complete more detailed research.  For example, I took notes from an online book titled TV Guide: Fifty Years of Television and learned how the political scene affected and revolutionized  after the promotion of the television. I learned how political campaigns, the first one being  the presidential election between Dwight D. Eisenhower and Adlai Stevenson, utilized the television to reach a larger audience and better affect the audience. I also researched about family life and how it was affected by the appearance of the television into society. Popular '50s sitcoms, like  Leave it to Beaver , portrayed the ideal family situation, which consisted of a working father, a household mother, and "perfect' children. The family situation illustrated in these shows created a standard within society to also have a "perfect" family and, therefore, the family life was greatly altered.

I had gathered the majority of my research, so then it was time to actually build my website project. After creating an account on weebly.com, I began designing my website (waynestelevision13.weebly.com). I chose the color scheme, font, and other design features. A classic name for this period in television"s history is 'The Golden Age'. Therefore, I named my website 'magnification of the Television: The Golden Age'. The general website layout was complete, so I began writing short blurbs about my topic and uploading them onto the site. Weebly allows you to create a photo gallery of various photos, so I searched for pictures from that time, as well.

After I completed the main research on these points, I brainstormed other ways to creatively add information to my website. For example, i did 'profiles' of popular sitcom shows from that time, like I Love Lucy. In also found pictures relating to my topic on the internet and posted them on websites. Several of these photos depict 1950s families watching TV, along with television ads, and pictures relating to popular shows during that time. One other creative touch i added was 'Did You Know'?' facts, which were short, interesting facts related to television during the 1950s. Once the site contained all of the valuable information and pictures, I published the site onto the internet.

The television brought many new possibilities--the most important one being an opportunity to deliver the news to the people quickly and effectively. NBC first brought television broadcasting news in the 1940s, dramatically changing the public's news availability. However, in 1951 Edward R. Morrow, the CBS News Vice President and Director of Public Affairs, began offering his weekly radio program (called "Hear It Now") on television as "See It Now", and this truly gained the most attention. Although the broadcast stations in New York dealt with a long process of converting video to film, the process would eventually improve over time. As imagined, this media revolution also made a great impact on the societal scene. Above are some of the major moments of news television in the 1950s... 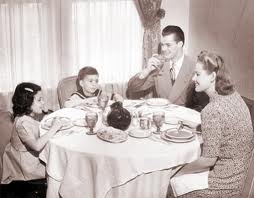 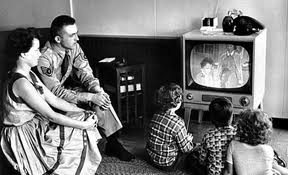 Effect on family life and communication 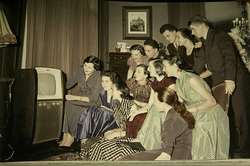 When the television became popular, shows illustrated how a "perfect" family was supposed to be and how they were supposed to act. Many of the families in these television shows lived in suburban areas, where they had a generally nice house. Each home contained the standard rooms that each home was expected to have, rooms where the family life took place, like the dining room, living room, and a backyard. Indirectly, these shows typically concentrated on material goods.  Having the consumer goods that brought happiness was considered essential.  In Leave It to Beaver, for example, one episode shows Beaver trying to get his new jacket.  Family shows also emphasized that people need to work for the things that they want.  In general, this meant the father going to work, the mother working at home, and the children going to school and doing chores at home.  The “perfect” lifestyle categorized in these 50’s shows stood at a standard to real families as to how they were supposed to live and interact…and breaking the standard would result in society’s disapproval. Throughout the past fifty years, television's depiction of family has greatly influenced the way our society behaves. 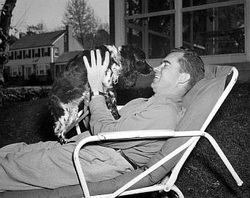 The 1952 presidential election between Dwight D. Eisenhower and Adlai Stevenson. One of the most significant innovations in political campaigning was when Eisenhower used the television to market himself.  He used short commercials to break new ground for all political campaigning to come.  Eisenhower also crafted a charming persona that boosted him to eventually win the election. Stevenson made the mistake of refusing to utilize television, which was one of the ultimate reasons for his future campaign loss. (In the picture (left), Vice Presidential candidate Richard Nixon became well-known for his careful marketing of the 'heartwarming' relationship between him and his dog, Checkers, which created a positve persona of himself to the public.) 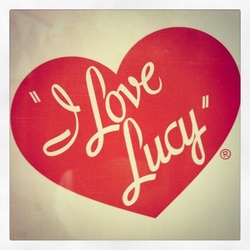 An American sitcome centered in New York City, feaaturing the two main characters, couple Ricky and Lucy Riccardo (played by Desi Arnaz and Lucille Ball).  They live in an apartment building owned by their two best friends, Fred and Ethel Mertz.  The show, which ran from 1951 to 1957, featuring six seasons, entertained audiences with the funny and lovable antics of the four friends, especially Lucy, who always somehow got into trouble.  Except for Elvis' first three appearances on The Ed Sullivan Show, I Love Lucy's first episode had the highest percentage of household views and had the highest average rating for a TV show in history.
Did you Know?
A television wave can go around the world seven times a second. 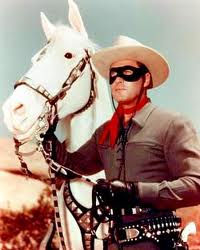 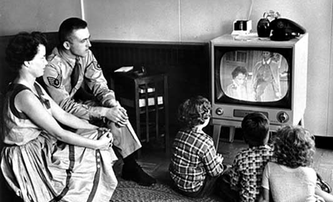 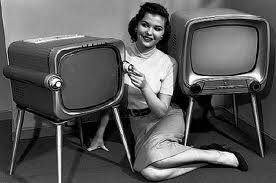 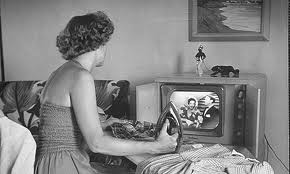 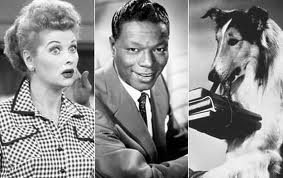 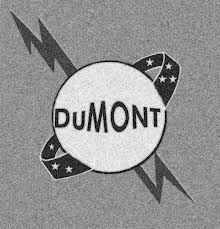 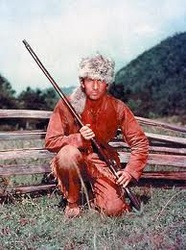 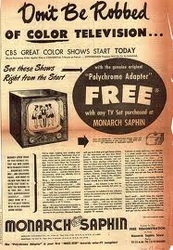 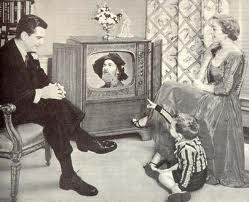 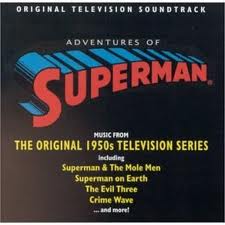 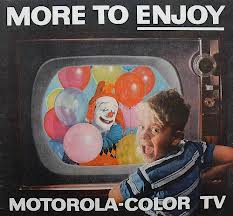 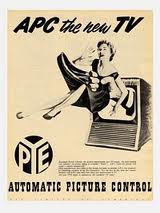 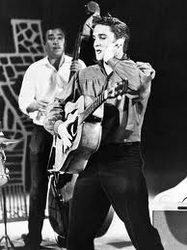 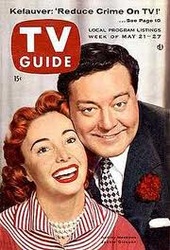 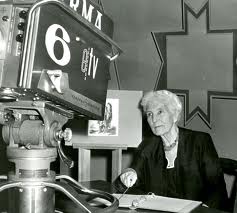